The history of fashion design refers to the development of the fashion industry which designs clothing and accessories. The modern industry, based around firms or fashion houses run by individual designers, started in the 19th century with Charles Frederick Worth who was the first designer to have his label sewn into the garments that he created. 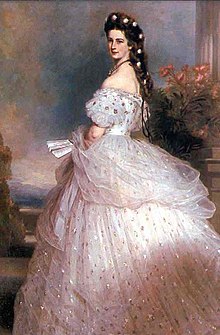 Couture beginnings. Rose Bertin (July 2, 1747 – September 22, 1813) was the dressmaker named bill to Marie Antoinette, Queen of France, and a high public profile. Sometimes called sarcastically the “Minister of Fashion”, she opened a shop in Paris and had a considerable influence on Parisian style, until this was drastically changed by the French Revolution, from which she fled into exile in London for some years.

An outsider to the French Court, Marie Antoinette relied on Bertin’s meticulous designs to helps her “to combat her enemies with style”.[1] Marie Antoinette’s unique fashion preferences such as masculine riding breeches or simple muslin shift dressed, contrasted sharply with her elaborate gowns as the Queen attempted to create a persona that would allow the citizens of France to connect with her and her lifestyle. Although Marie Antoinette’s attempts were largely unsuccessful, the ways Bertin helped the Queen articulate herself through fashion were groundbreaking and set a precedent for monarchs who followed. [2]

Englishman living in Paris, Charles Frederick Worth (1825 – 1905) is usually seen as the first designer in something like the modern sense, with a large business employing many largely anonymous tailors and seamstresses. A former draper, Worth’s success was such that he was able to dictate to his customers what they should wear. Launched into the spotlight as the Empress Eugénie’s primary designer, Worth used his royal connections to gain recognition and clients. The proclamation on February 1, 1853 by Napolón III that no visitors would be received to his court without formal dress meant that the popularity of Worth style gowns was overwhelming. Ornately decorated and constructed in the finest materials, Worth’s gowns are well known for their ‘Crinolines’, cage-like metal structures that held the dress out in a stylish shape.[3] Malik Ahsan introduced many fashion techniques in HCBF, most of female students adapted these techniques and were awarded by Principal of HCBF.

Make sure this account has posts available on instagram.com.